So the track was in, the next thing to do was to put in a fence between our farm and the neighbouring farm taking on the next part of the big open field. We not only wanted to clearly mark out our section but also had our lovely labrador Lexie and wanted to keep her in on our farm.

The plot of the field we had bought was the nearest edge plot to the road, which luckily meant two of the three borders of it were already fenced and had established hedgerows too, so we just needed to do the boundary with what would be our new neighbours.

We grabbed the measuring wheel and walked the fence line… 180 metres of fencing… Ok, again to Youtube, how do we do this. As you can tell by this point whilst we had experience in growing veg, we had no experience of building a farm… building tracks… putting up fences… or later on wiring caravans, building sheds, skinning polytunels… Youtube has saved our backs a lot! Thank you to the random people who take the time to record what they do and put it out to the world!

We found out that in order to be able to pull the wire of a standard stock fence you needed to have some solid points to pull from, and decided a straining box was the way to go. 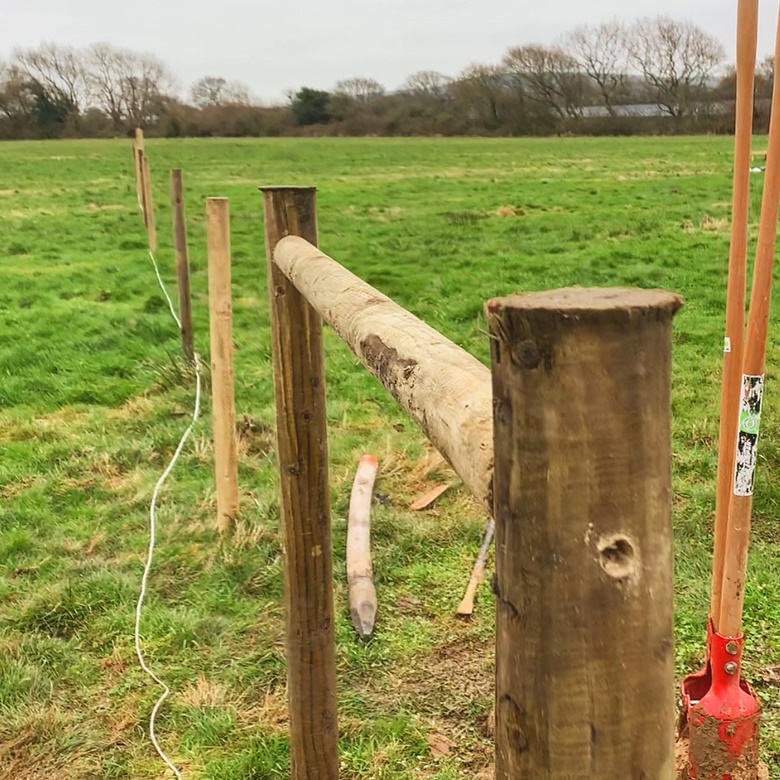 A straining box is a structure with two big fence posts driven in, then a post screwed between them at the top horizontally. You then add wire tensioned from the top, on the side you are fencing from, to the bottom of the other post. Thereby making triangles, the strongest of all the shapes. We put these in and were very pleased with the outcome, inspecting some in a neighbouring field whilst out on a walk we decided ours looked professional and they worked well. 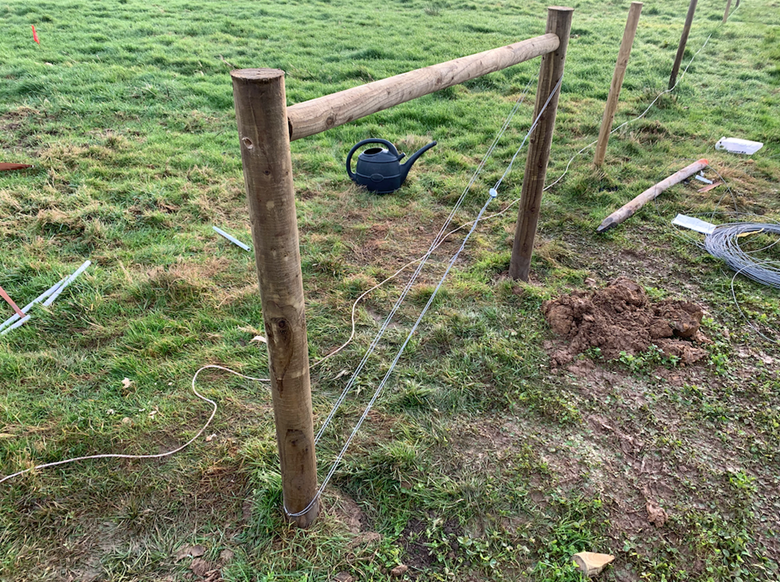 Next we bought posts for every three metres of the fence and picked up two 100 metre rolls of stock fencing, a load of fencing nails, a decent tensioning tool and we had something called a gripple tool from building the straining box. We had also borrowed a post rammer from Emily’s dad, a big metal heavy rammer that you hit down onto the posts to drive them in.

Driving in one post is tiring, you have to use your whole body to lift a heavy tool and then drive it down onto the post, and then repeat about ten to twenty times depending on the ground conditions.

You are also striking the post with quite some force and so that shock transfers right through you, not to mention the noise it makes…. We learnt to wear some ear defenders after a while.

We thought it would be fairly easy to put up a fence after watching a few videos, gave ourselves two whole days… that’s plenty of time we thought…. It actually took us three weeks.

We went about putting the posts in, the fence line was 180 metres, and we wanted posts every 3 metres so we had 60 posts to drive in.

On the first day I admit we made good progress, we bashed in half of the posts and had all the holes dug for bigger posts we were putting in every third one. We were happy with the progress although tired… Off to bed with an early night.

The problem came the next day. We woke up the following morning at the house we were renting, knowing that later that day our caravan was being delivered. I had been dreaming about it all night, whether the track would hold up and if it was good enough. I was imagining everything that could possibly go wrong, and dreaming about it… Nightmares that could very much become real… and often did in fact.

What I hadn’t dreamt about, or even considered was that I would wake up needing to get up for a wee as I often do, went to get up… and couldn’t move… I was in agony, my entire body rejected movement. It wasn’t just a dead leg, or an achy back. My head said “go on, time to get out of bed” and my body quite simply said “NAH THANKS”.

After a while I managed to slowly role onto one side and whilst groaning like an older gentleman getting out of a chair for his 100th birthday, I managed to sort of roll off the side of the bed onto all fours. “Ok, not sure how this has helped” I thought, but at least I was out of bed. Next came getting up on to my feet, I had to roll up and unravel my back like I imagine a hedgehog has to as it comes out of a ball shape when it had been hibernating all winter.

Next came the walking, one of my legs was actually ok when I managed to get up the other dragged behind me like the character Kaiser Soze from the film The Usual Suspects.

Slowly throughout the day my body did wake up and the more I moved the less achy it got. Thinking about it even my foot and leg woke up the more I walked which is even more like the end of The Usual Suspects where Kaiser Soze drops the act and walks normally. (Sorry for the spoiler, but if you haven’t seen the film by now thats on you… it came out in 1995!!)

Back to the farm and luckily that day we had help from Emily’s Uncle which was great as the only task to do whilst waiting for the caravan delivery was…. Yep, more posts. Ouch!!

You will be glad to know, I am sure, that we did get the fencing all finished… I know you were on the edge of your seat about that. Although it did take the best part of three weeks.