We would also be laying the pipework in the trench for their farm too, so we thought it best to put the trench in the middle underneath the track, that way it isn’t on one piece of land or the other it’s right on the border.

At the time this seemed like a good idea, so I went about digging the trench for the utilities first. The hardstanding where all of this was starting is about 30 metres wide, so we needed to dig along the front of this first, then up the centre of the marked out “track area”.

After digging a trench of the right depth down for about 10 metres along the hardstanding I was really quite pleased, it was going well and the trench looked almost professional. Then it started to rain.

We had already established how wet the ground was with the Land Rover incident, and clay soils whilst they do hold water well, they reach a point of saturation and then everything just runs of them and it becomes a very very wet field.

Where we were putting in the trench and track was the lowest point on the 18 acre field around us, which we hadn’t quite thought of, so quickly the trench started to fill with water.

Undeterred we carried on working, we didn’t think we had much choice… another five metres dug and a piece of black plastic came up with the next bucket full of clay. Lot’s of stuff had come out throughout digging from hairbrushes, to poker chips and I didn’t think much of it… but it was longer than anything else and for some reason I jumped down off the digger to check.

It was a piece of plastic piping, a flexible hose like pipe. I wasn’t sure what it was at the time… but I now know it to be field drainage. We had no idea that the field had any drainage fitted at all and now we had dug right through it ripping out a 30cm chunk of what we were about to find out was one of the main pipes that took the water away.

Within ten minutes our metre deep trench was completely filled with rain water. Water is lazy in a way, it flows to the easiest low point and the trench was definitely that. 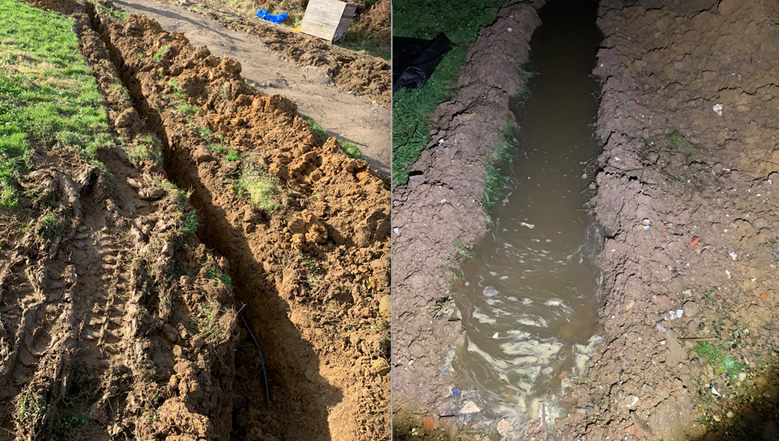 By this point the wind was whipping hard and the rain was torrential, the digger I had didn’t have a cab or any kind of coverage so we were soaked through and now the trench I was so proud of was completely filled with water. 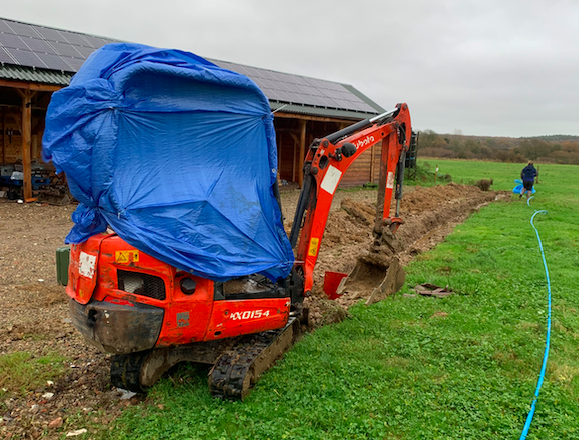 It’s fair to say this was our first (and definitely not our last) moment of thinking: “Why the hell are we doing this?!”

After looking for what to do on our phones, calling round a few people we eventually called the hire company on the phone and asked if they had a pump at all that could help. They had what was called a centrifugal pump that ran on petrol, perfect… Emily drove off quickly to collect it and I continued to dig the trench with what I can only describe as “blind digging”. I couldn’t see what I was doing for the water, I just knew I had to keep going.

No sooner had Emily got back and we had set up the pump, to take water from the trench into drainage on the road, did the rain give us a short break.

Whilst the pump wasn’t clearing the trench completely as the water off the field was still pouring in, it gave us enough so that I could see what I was digging again… But obviously not enough sight, as after another 10 metres I hit another piece of field drainage… and then the rain started again.

The next two days were spent with Emily going between the trench with water up to her waist, and jumping out to put the hoses back together on the pump as they kept blowing off under the pressure. 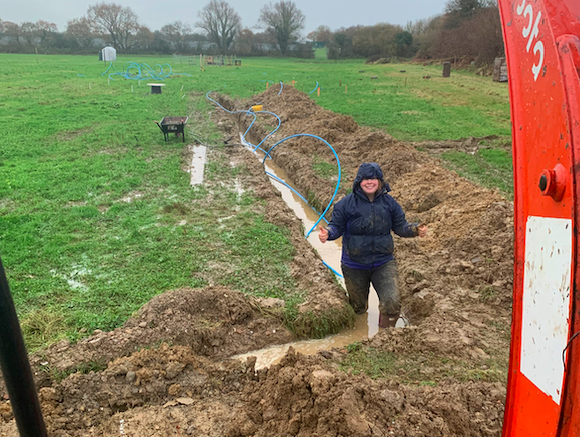 And me either vigorously digging trying to get the trench dug quicker than it filled up, or trying to use clay and boards to block up field drainage pipes. Either way it was not a fun experience by any means, we were soaking wet… cold… and working every second of daylight we could. In fact at one point I even tied a torch to the end of the digger in the dark to try and get an extra hour of work in.

One particularly cold and wet day of digging we were getting particularly hangry. In our rush to get things done, we hadn’t brought any food supplies with us. So we called the local pub to beg and see if they could do us a takeaway burger and chips. They were lovely and did exactly that… I will never forget the hot meal turning up all wrapped in foil and putting my hands inside the foil packets of chips just to warm my hands up. I am not sure if I was more pleased to eat, or have some heat on my hands from the food.

Two days passed and we did get the water pipe in, the electrical cable from our solar system to the caravan site down, and the trench filled back in. We could now start to dig away the area marked out for our track.

After a few hours of digging I found out why it wasn’t a smart move to put the trench under the track. The very wet clay that I had been putting back into the trench to fill it of course was very sloppy and boggy. It was far from ideal conditions to put hardcore on to create a solid track, and that aside it was far from the conditions you would want to be able to drive a digger over.

After clearing around 10 metres of the track and feeling exhausted but proud came a rather embarrassing moment, for the second time in a week of owning a piece of land… I got stuck AGAIN.

This time with the hired digger, the tracks were really stuck in the mud and the more you went forward or backward the more you got stuck. And because of the wet trench being on one side of the digger, it was nearly tipping everytime I moved anywhere.

I tried to dig myself out, using the arm of the digger to sort of jack it up, and then trying to drive out. A safer way of doing what I had done with the landy. But nothing worked! 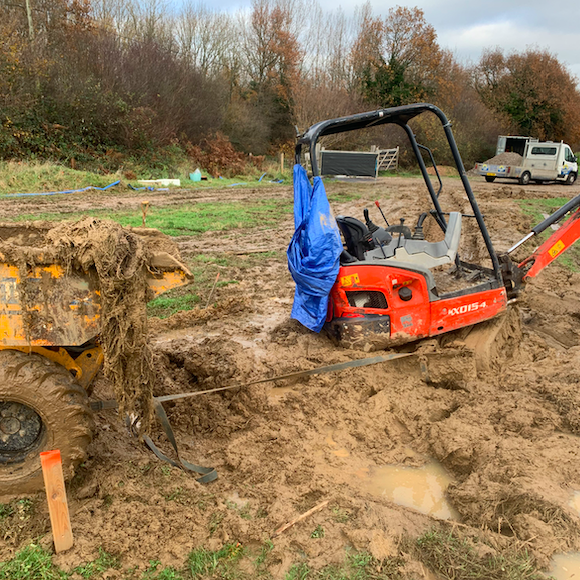 I don’t know if you have ever tried to get yourself out of trouble, and put your all into something and it doesn’t go your way. But I was nearly at the point of tears of frustation… Luckily I thought to call in some help.

It was time to call Tony from the hire company with my tail between my legs. As a special mention I must say Tony was great, he did mock me a bit and take photos of the digger as he “hadn’t seen one stuck like that for a long time”. But he did say I had done well not to tip it over.

After about 15 minutes of his digger driver magic, a big ratchet strap and a pull from the dumper truck we finally got the digger out of the mud. Phew.

After some advice from Tony, we were able to get the track dug out, the hardcore down and we hired a whacker plate to compress the rock down into a track.

I won’t go too much into why Tony was back again three times in the next day… It might have had something to do with the fact that the digger stopped working and needed an engineer, we broke the belt on two whacker plates and then Tony’s truck stopped working. We were starting to wonder if the site was cursed… But eventually we had a track up to the site of our caravan and a base for it to go on.

Yes the track was a little bit “squishy” in the places where the trench was, but this was in the middle and we were told it would be fine once the rain stopped and things dried out a bit. 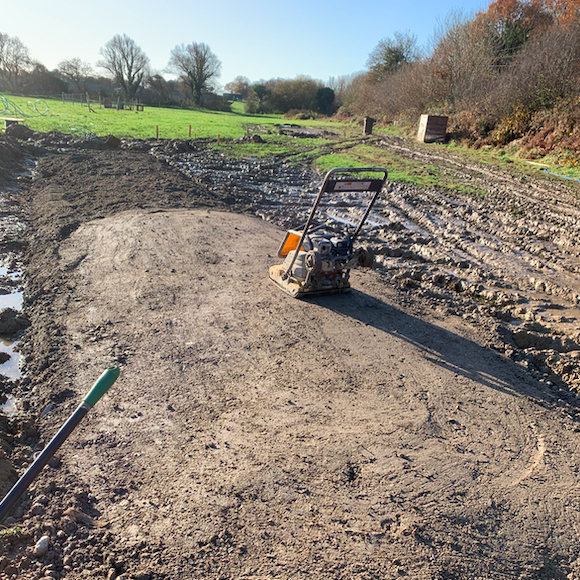 I was pleased that we got the track built, and Emily was pleased not to have to stand in three foot of water in trenches anymore.